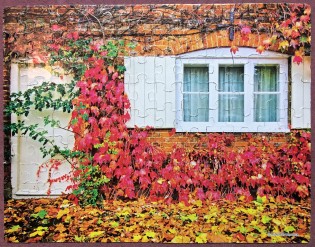 I wanted to start off the new year by keeping track of the number of puzzles and pieces assembled, so I started the year with a one coffee puzzle. There’s only one left after this one! Very pretty images, but I choose poorly – I hadn’t yet finished my first cup of coffee and both of the sides of this puzzle were a little bit of a challenge for my pre-caffeinated brain.

I assembled the edges on the ladybug side first, but seeing the pieces left I decided to flip the puzzle over to assemble it, my poor brain wasn’t awake enough yet to handle those red flowers! The other side was a little less difficult, but I have to say that it took me much longer than it should have. I’m going to say that the reason is not enough sleep – that’s my story and I’m sticking to it! 😉