This was the second of the Victory wooden puzzles that hubby bought for me, and it seems as though the ridiculously loose fit is just how they are. I’m not a fan.

I did enjoy the image much more than the previous one, the colors were much nicer to work with. It’s just a preference thing, many people prefer photographic images but I do not.

I didn’t really think anything about it until my mom mentioned it, but I agree with her that it’s a little annoying that the whimsy pieces have nothing whatsoever to do with the image. Having automobiles, a jet, a battleship, and a tank (I think) makes absolutely no sense for a puzzle with a historical image. Hengest and Horsa were legendary brothers who are said to have led the first Anglo-Saxon invasion of Britain in the 5th century. I wasn’t there, but I’m pretty certain they didn’t invade with fighter jets and Ford Fairlanes! 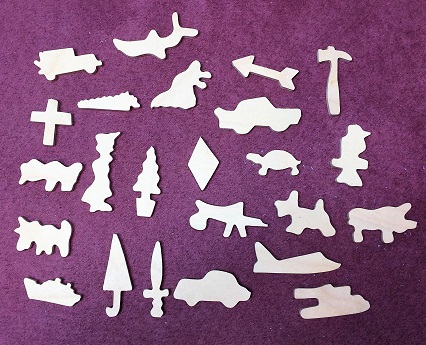 All of the drawbacks aside, I enjoyed assembling this puzzle much more than Swiss Market Square. The image was the main factor for me, as the quality was pretty much exactly the same. The colors are gorgeous, and it was fun to figure out the picture as you went along. The two Victory puzzles I have don’t come with an image on the box, and has an explanation why…

“NO GUIDE PICTURE is provided with this Gold Box VICTORY Jig Saw Puzzle. To do so would destroy much of its absorbing interest. The greatest pleasure is derived from not knowing beforehand the subject which the Puzzle will make and then to see the picture gradually form as the pieces are assembled.”

My husband is a sweetheart, and we just celebrated our 31st wedding anniversary. I appreciate his getting these puzzles for me, it’s so sweet! But having assembled a world class puzzle earlier in the year I feel as though I’ve been ruined for any other vintage puzzle. The amazing quality of the Municipal Building puzzle doesn’t seem to have an equal and every other puzzle has fallen far short for me. It makes everything else seem disappointing. Perhaps I just need time.

The recent Artifact puzzle that mom and I assembled wasn’t disappointing, in fact it was great fun for us. Maybe it’s just vintage puzzles I need to stay away from for a while. 😉

My wonderfully sweet husband bought this for me as a surprise. I wish I could say I liked it, but I didn’t. Mom didn’t enjoy it either, we assembled it together. It’s an uninteresting image with a terribly loose fit – so loose that sometimes you couldn’t tell if the piece was correct or not because there is too much wiggle room; which is difficult for large areas of one color like the sky.

Victory is an old brand of wooden puzzle manufactured in the UK, and this is my first time giving them a try. I’m not a fan of the cut, except for the few whimsy pieces most of the rest are regular looking shapes. Most of the fun of wooden puzzles for me are the fantastically irregular and interesting shapes that using wood allows you to make. As I said, the fit was extremely loose as you can see in the picture below…

I just pulled on the pieces and there’s this much play – it’s way too loose. I’m not making final judgement on the brand from this one puzzle; in fact hubby bought another one at the same time that I have yet to assemble. Perhaps that one will be a more interesting (to me) image and a less wobbly fit. I guess we’ll have to wait and see!

Perhaps the other Victory puzzle is what I should be doing today – I haven’t worked a puzzle in a week and I need to get back in the swing of things soon, my queue is down to only 2 puzzles left! 😱😱

*just remembered I have a few pictures in my phone of the last several puzzles I’ve completed so I do have a few more days leeway before I’m out of puzzles to post – thank goodness!*

Got my hands on another old wooden puzzle, are you surprised? It’s a lovely image, but there were so many missing pieces! I went into this knowing there were only 499 pieces, but I mistakenly assumed that meant there was only one missing piece. I was wrong of course. This puzzle apparently started out with 510 pieces, not 500. Still, mom and I had a good time putting it together and that’s what counts. 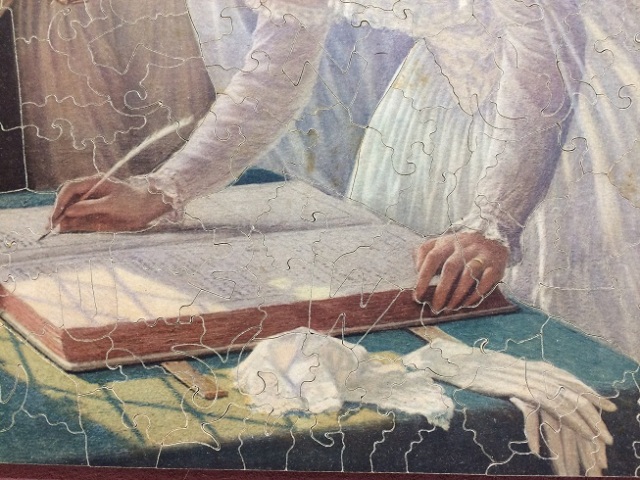 There is such beautiful detail in the artwork, the hands seem almost photo quality. It was a beautiful puzzle and mom and I enjoyed it even with the many missing pieces.

EBL 1920 – I wish I knew if that was in reference to the date the puzzle was cut or if it’s when the image was painted. It could be both, actually.

I’ve got one more old puzzle yet to assemble and one more in the queue, but unless I find something amazing I’m done with the vintage/antique puzzles. Not because this one had lots of missing pieces, but because either fortunately or unfortunately (I’m not sure which), the municipal building puzzle was so amazing, and such fantastic quality that I feel that everything else is a bit of a letdown. Even if it’s great quality it still isn’t as good. I was so lucky to find that puzzle; it’s a one of a kind, exceptionally well made, and mom and I enjoyed the journey of putting it together so much – it just can’t be matched or duplicated. Nothing even really comes close.

I’ve told hubby to stop sneakily buying these old puzzles on eBay. He purchased a few for me as a surprise, it’s very sweet but I’d prefer it if he didn’t do that anymore. I think I’d rather be happy we had the experience and fun of assembling a very rare and wonderful antique than be let down by the not up to snuff quality of lesser (but still lovely) puzzles.

This is another vintage wooden puzzle that mom and I assembled. It was great fun, with an amazing fit that you wouldn’t believe! We know absolutely nothing about this puzzle – it came without a box so we don’t know the maker or name of the image. Still, it’s lovely and mom and I enjoyed it very much.

At only 340 pieces it was much quicker the the municipal building, but it was still quite difficult. There’s something about a vintage image like this that makes all the colors seem fuzzy and indistinct which adds quite a bit to the challenge. I love the softness of the look even though it adds to the difficulty for me.

I really had a great time with this puzzle, it’s beautifully made and has a lovely image.

Mom and I are currently working on another vintage puzzle, this one is much smaller but it’s beautifully cut and much easier to figure out what it is – there’s a wedding!

It’s a Pastime puzzle, like the municipal building we assembled, and the figurals are familiar looking as well. Like the first mystery, we don’t know what the finished image will be, and we don’t know if it’s complete – but that’s not really the point of putting this puzzle together. The point is enjoying the puzzle and spending time together enjoying each other’s company. 💖

It’s a little less difficult than our big puzzle, there is much more color to assist with finding pieces, but just as much color line cutting – as you can tell by the bride’s veil, we have no idea what’s behind her! We revel in the challenge of it, and every time we find a connection we feel a little better about our aging brains. 👵 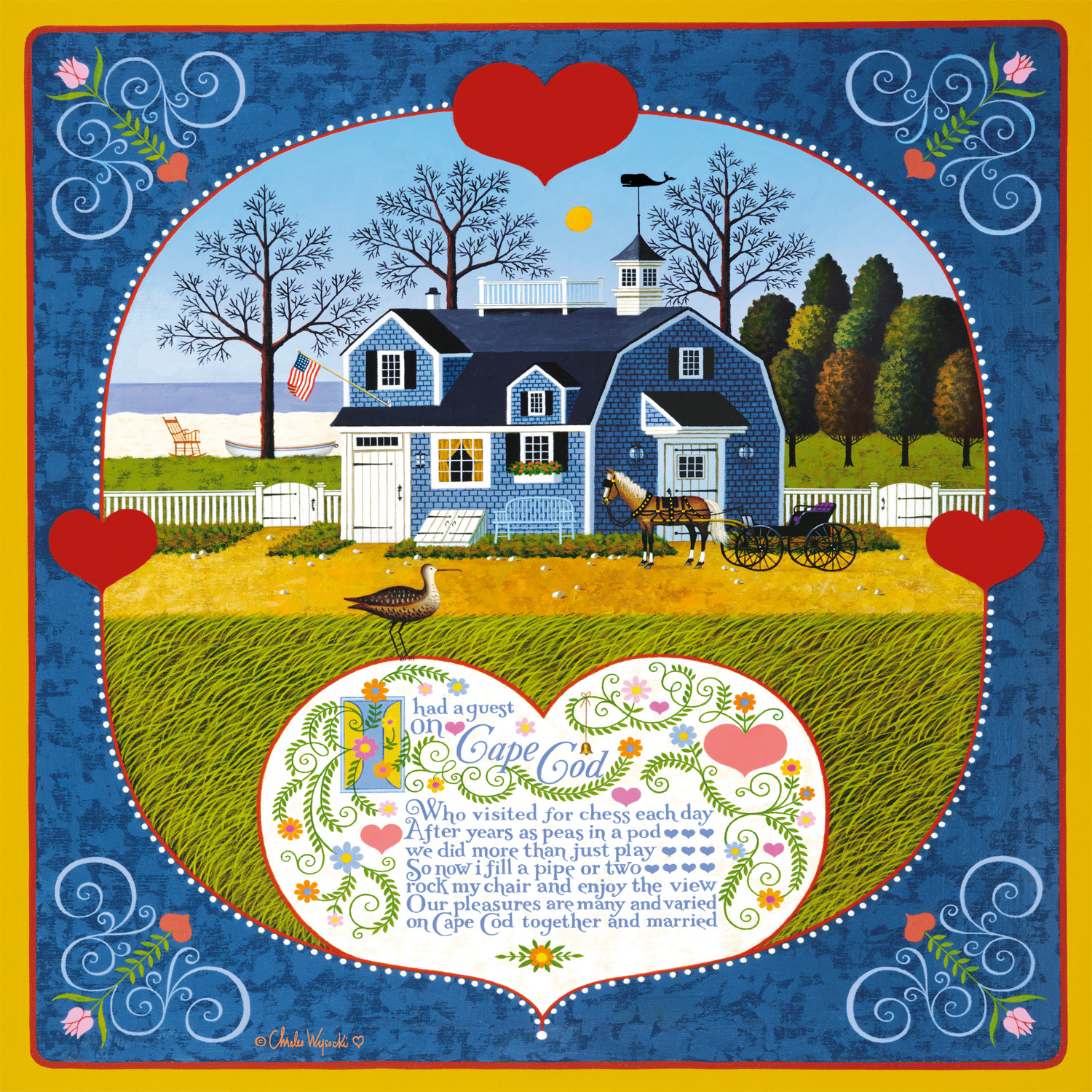