I did it! I actually did it! I know it’s a bit anticlimactic since the entire puzzle is not all connected, but for now I’m thrilled with the fact that I have finished all FORTY THOUSAND THREE HUNDRED TWENTY pieces! Wow!

*actually I assembled 44,352 pieces since I’m an idiot and dropped a section after it was completed and had to reassemble it. 😐 Yup. I. Am. An. Idiot*

Bambi was as much fun as I’d hoped it would be, and I had a great time assembling it. Flower was the cutest thing, Thumper was more difficult than he looks and Bambi’s little legs were so skinny! It really was a fun section to put together and I’m so very proud of myself!

I’m a little sad too, this was 6 months of my life. And I’m done, it’s over. There is still the final assembly of the 10 sections to go, but who knows when I’ll be able to do that. But now there’s no more giant puzzle to work on every day. It’s been here for so long I don’t know what I’m going to do without it. 😦 Although, if I find I’m missing it terribly, I always have the extra Fantasia section I could assemble. It has a damaged piece and Ravensburger replaced it for me so I still have the original section!

I’m not sure why I decided I wanted to do an extremely large puzzle, but it seems I picked the perfect time. Until this puzzle was released there weren’t any large piece count puzzles that I wanted to do. If you’re going to spend a lot of money and time on a puzzle it needs to be an image that you like. The other giant puzzles had beautiful images, don’t get me wrong, but they just weren’t my cup of tea.

Less than a month after I decided to try to find a large puzzle to attempt, Ravensburger announced they were coming out with a new puzzle to break the record of world’s largest commercially available jigsaw puzzle. I love Disney movies, especially the older ones, and Ravensburger is my FAVORITE puzzle manufacturer so this was perfect!

It was released in Europe in September of last year, and I ordered it from a puzzle retailer in Germany. It arrived September 26, and the rest is history I suppose. 😉 Actually the history of me completing this puzzle is archived here on my blog!

So thanks to everyone for hanging around and “watching” me work on this project. It was fun and terrifying, exciting and scary, exhilarating and overwhelming – and I kept at it and I did it! 🙂 😮 🙂

It’s no April Fools joke, I am one day away from being finished! I counted all the pieces left and there are 278 to go! I’ll get up tomorrow morning once the coffee is brewed and get myself in the puzzle room for a day of puzzling to finish this behemoth!

Everything is separated by shape and the left side of the puzzle is done so I can use that to know which shape I’m looking for.  It’ll still take a lot of the day (unless I get up early), and I’ll be completely finished. What in the world am I gonna do with myself?

I’ll probably stick to 1000 piece puzzles for a while, unless I’m wishing to spend a little more time on a larger project.  I have plenty of 4000 piece Heye puzzles to do, a 3000 piece Ravensburger, and plenty of 2000 piece puzzles as well. But perhaps for now I’ll stick to the smaller puzzles. I won’t know for sure how I’m feeling about it until I’m there. I may, as is usual for me, completely change my mind and do something completely different. 🙂

Anyway, tomorrow is the big day! I’ll be finished, but I have no idea when I’ll be able to actually assemble the entire thing, that may be a while. I sorta have to make up my mind about where the puzzle is going to end up. 😐 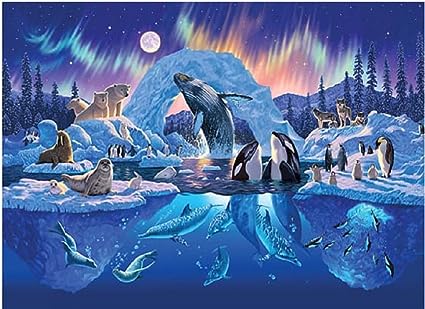