Remember this beauty? Big news! I wanted to find out more information on our fantastic puzzle if possible, and contacted Bob Armstrong, one of the leading US experts on vintage wooden puzzles. He did a bit of research and also got me in contact with Anne D. Williams, author of The Jigsaw Puzzle: Piecing Together a History, and one the foremost experts on US jigsaw puzzles who maintains a listing of all known Pastime puzzles. I spent much of the day on Friday taking pictures, sending emails, looking things up, being very excited, and spending lots of time on the phone with mom to relay all the information I was getting! I’m thrilled to pass along the information they’ve given me.

Once I sent pictures to Bob Armstrong, he said he believed the puzzle to be one from the Picture Puzzle Mart lending library, run by Josephine Flood in NYC. It was a very exclusive library, as Ms. Flood only had the best cutters cut her puzzles which were unusually large and well crafted. At 1600 pieces, mine is quite large for a Pastime – and well crafted doesn’t even begin to describe the fantastic quality.

According to Mr. Armstrong the pieces were clearly cut by top-notch Pastime cutter. I heartily agree! They’re stunning and unbelievably well made. Additionally, very few Pastime puzzles used photographs for their images; those that were used were usually for commissioned puzzles. Mine seems to be one of a kind!

When I heard from Anne Williams, she agreed that it is most definitely a Pastime puzzle cut by one of their best “Pastime Girls” – Parker Brothers only hired women to cut puzzles. Their commonly used explanation was that men lacked the fine motor dexterity needed to make the small and intricate shapes; and because women already knew how to use sewing machines it was easier for them to learn the use of the treadle saw used to cut puzzles. Many of their competitors used men to cut their puzzles though, and most likely Parker Brothers used women because they were able to pay them much lower wages.

Ms. Williams even had a name for me – cutter #12, Eva Audet Gagnon – one of the most skilled Pastime Girls. There are examples of the pieces Eva designed in The Jigsaw Puzzle: Piecing Together a History, and they look very much like many of the pieces in my puzzle! When mom and I started sorting this puzzle I used Ms. Williams’ book as a reference and it was what first led me to believe that this was a Pastime. At this point there’s no way to be certain that Eva Gagnon cut this puzzle, but I would love to think that she did. According to Mr. Armstrong the figure pieces in my puzzle are of a higher quality than those in most Pastime puzzles, and they were clearly designed and cut by one of the best.

Ms. Williams disagreed about the Picture Puzzle Mart lending library though, as she was able to further pinpoint an approximate age range of the manufacture of this puzzle. Both the image and cutting style suggest that this puzzle was cut sometime in the first two decades of Pastime puzzles, between 1908-1927. As the Municipal Building in NYC was built from 1907-1914, and the coloring of the photograph also helps to date it, she believes this puzzle to be pre-1925. The lending library that Ms. Flood ran was only active between 1929-1950, so according to Anne this puzzle was most likely not one of those.

I can’t even explain how excited about all of this information mom and I are! We are so happy to be able to say without doubt that it’s a Pastime puzzle, and even more so that it almost certainly is a commissioned one of a kind puzzle that is potentially over 100 years old. 😍

According to Anne, Parker Brothers did list some extremely large puzzles in their pre-1915 promotional materials (1500-2500 pieces), but for the most part they rarely made puzzles over 1200 pieces. At 1600 pieces, this beauty is a rare and wonderful find – and I am over the moon that I took a chance on that random box of pieces! Anne says that she’s kicking herself that she passed it up (she apparently saw the listing and decided against it) and that it would unquestionably go for “very big bucks” if I wanted to list it for sale online; and Bob says he’s definitely a potential buyer if I ever decide to sell. WOW.

Both mom and I had the same feelings about this – we both want to assemble the puzzle again! 😉 First, we’re both a little sad that the assembly is over, and wish we had another mystery puzzle box to work on. Second, knowing what we do now about this puzzle and it’s rarity we’d both like to work with these amazing pieces again. This is truly a once in a lifetime find, and even if we found another box of pieces online somewhere it would most likely not be of the same caliber as this one. I am so thankful that the joy of assembly and spending time with one another was our goal when we assembled it, because you can never get back the wonder and excitement of the first time. What a treat that we had that experience together!

This puzzle is being added to the list of known Pastime puzzles that is maintained by Ms. Williams. What an unbelievable find! I’m so glad I decided to try and learn more about this puzzle, finding all of this out has been such an adventure! I know my fellow puzzlers understand. 🙂

Many thanks to Bob Armstrong and Anne D. Williams for taking the time to correspond with me regarding this puzzle and helping to identify it. The puzzle community is a group of fantastic and giving people and I am proud to be a part of it.

Cue the fanfare and fireworks, the Puzzle Posse has completed The Challenge of 2019! The Mystery Box Puzzle I gave to mom for Christmas is finally finished! 🎇👵👵🎇

It took us almost 7 weeks, but partly because we only wanted to work on it together; we had to wait for days when we were both available and able to puzzle. There were many days with no progress made at all, but we loved all the time we got to spend together. ❤

I purchased this from eBay, it was just a random box of vintage wooden puzzle pieces. I had no idea how many puzzles were in the box or if any of them were complete. One of the absolute best puzzle purchases ever! It was given to mom for Christmas last year, the gift wasn’t the actual puzzle, but the time we would be able to spend with each other assembling it – and if I had spent 10 times as much money as I did it still would have been worth it (but I’m certainly happy that I didn’t have to empty my wallet quite that much 😉 ).

It’s a fantastic image – and was extremely challenging; not only the busyness of the bottom portion of the puzzle, but the deviousness of the color line cutting. They weren’t playing around back in the days of hand cut wooden puzzles! Sometimes you could rely on the image to help you with assembly, but where one thing meets another – watch out! We loved it❣

From what little research I was able to do, we believe this is a Pastime Puzzle manufactured by Parker Brothers. Two of the pieces had the word Parker written on the back, and some of the pieces look almost exactly like examples of pieces produced by Parker Brothers for their Pastime Puzzles shown in The Jigsaw Puzzle: Piecing Together a History by Anne D. Williams. It’s our moderately educated guess. If you have any information about this puzzle, I’d love to hear from you!

The puzzle was missing only 2 pieces out of 1600, which isn’t bad at all. Sure, it’s a tiny bit of a disappointment, but it takes nothing away from our enjoyment of the assembly. We believe this was manufactured in the early 1900’s, so it’s most likely at least around 80 years old. The swastika shaped piece in the sky portion makes us think it most likely pre-dates World War II, so that’s our best guesstimate. Missing two pieces doesn’t seem like that much of a big deal when you consider how old it is and how many total pieces there are.

We wanted to get a good close up of the amazing color line cuts to show you, it’s something, isn’t it? Unless you’ve worked with this type of cutting before it’s difficult to explain how this messes with your mind. Your eyes are telling you that the piece that should fit next to something should be a certain shade or color, but you absolutely cannot trust that! Bright sidewalk next to the dark green of the grass with the cuts made almost exactly where the colors meet – it’s an incredibly strenuous mental workout!

Here is just another example of the color line cutting, and the puff of white smoke from that smokestack kept us guessing until almost the very end! You can see here where the hand coloring has been added – and it looks as if it was painted directly onto the puzzle image itself. The green of the grass and trees was enhanced, as were the 3 American flags, the cupola of one of the smaller buildings, and the white smoke. This is a beautifully crafted puzzle, stunning in it’s complexity and quality!

This part had us faked out, we were certain it should have been at the top of the puzzle somewhere, and spent too much time looking for where we thought it should have fit in. Again, with no help from an image our brains were tricking us – it’s in the lower third of the image, nowhere near the top. We had to override our puzzling instincts and just go where the piece shapes took us. 🙂

Here’s my adorable mom with “the best Christmas present she’s ever gotten”. Her words, not mine. ☺ You can tell from this picture how very large this puzzle is, approximately 30 x 40 inches. Wow. The Posse has done it again!

In 48 days! With no box, picture, or a clue as to what it might be I think we did a pretty damn good job! I have no idea what we’re going to do with ourselves now, mom says we have to find another big project. It’s her turn to find us something awesome! 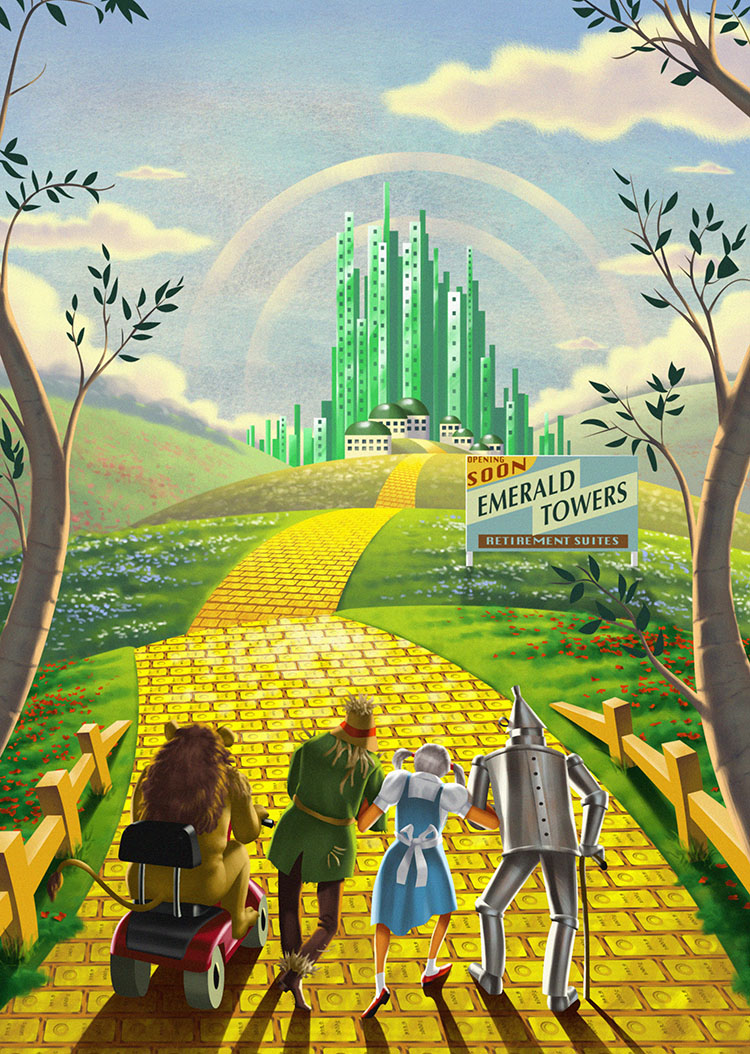