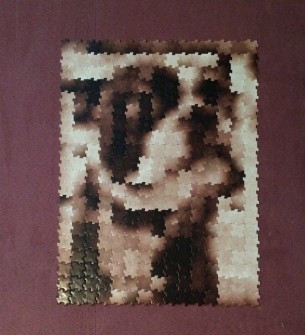 Is that not the coolest thing? Mom found the most awesome puzzle/program at the thrift store and I can’t stop playing with it! It’s called Ji Ga Zo Puzzle and it’s so freaking cool! That’s my handsome little guy up there, and this is my mom’s little one…

Ji Ga Zo comes with a program disc and 300 puzzle pieces shaded in sepia tones on one side and in bright colors on the other. Both sides of each piece have the same small image on them. Once you install the disc on your computer you load any picture into the program and it turns your picture into a map that you can print out. It looks like this..

You assemble your puzzle according to the icon map, taking care that the images are oriented properly and you have a mosaic puzzle of your image! It is so much fun; mom and I have done puzzles of our dogs, all 3 of my kids, and a few others. It’s hard to stop playing with it. You think, “Ooh I have the coolest picture – let’s try another one!”

Some pictures don’t work as well as others, there has to be enough contrast in the photo. So choose a good picture, print out your map (or work from your screen if you don’t have a printer), assemble according to the icons and you have an awesome puzzle! Best part is you can use the same 300 pieces over and over again to make puzzles of whatever you want!

A word of warning though, the instructions tell you to assemble the puzzle with the shaded side up – follow the instructions! We decided that it would be easier to assemble it colored side up and so we did. Doesn’t work, it flips the orientation around and you end up with a puzzle that looks nothing like your picture.

I show the picture we used to make the puzzle because it’s just striking how close you can come with only sepia tones in a mosaic puzzle. When you see the image up close it doesn’t look like what it’s supposed to. You need distance to get the best effect with a mosaic puzzle; back up a few feet and you’ll be amazed! Works great on people pictures too….

Best $1.99 spent at the thrift store ever! Actually, she spent $1.99 twice because there were 2 of them, unopened! I checked around and they are for sale from different retailers all over the web. We have had a blast making puzzles of everyone, and I think it’s the coolest idea ever! I even saw a Japanese version of it on Amazon that has 520 pieces and color. 😮

This Ji Ga Zo Puzzle makes me very happy, I have had so much fun with it! It can seem a little tedious at times trying to find the right piece but it goes pretty fast and like most games it’s more fun if you’re playing it with someone. I did a few at home by myself and it was fun and awesome to see the finished image, but it wasn’t quite as much fun as when mom and I worked on it together. What a great concept and what fun for puzzle fans! 🙂

The very first Wasgij Destiny! This one was much more difficult for me, perhaps because I wasn’t feeling well, or just because it was more difficult. Who can tell? As usual, I don’t show the entire image because I don’t want to spoil the fun of figuring it out!

With this puzzle the box shows children at school in the cafeteria and you have to puzzle them at their class reunion many years later. Will the lovebirds still be in love? Will the best friends still be friends? How will the teachers have changed? As usual Graham Thompson’s image is fun and funny and excellent for puzzling!

It took me 3 days to finish this puzzle, partly because it was a little more challenging than usual, and partly because there were many things going on with family obligations. Still, when I could I worked on it and it was a pleasure. As usual the quality was excellent and makes for a great tactile experience. Every time I complete a Jumbo puzzle I want to immediately do another; the way the pieces feel and fit together makes for a wonderful assembly in every way.

If you haven’t tried a Wasgij or any other Jumbo puzzle I highly recommend it. They have a great selection of puzzles to choose from –  photography, landscapes, collages, fine art, and some of the best cartoon puzzles around. There’s something for everyone!